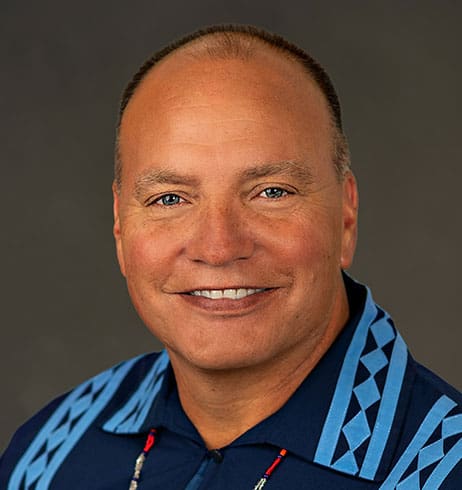 Gary Batton is the 47th Chief of the Choctaw Nation of Oklahoma, the third-largest Indian tribe in the United States. He was sworn into office on April 28, 2014, upon Chief Gregory E. Pyle’s retirement.

Batton began working for his tribe in 1987 as a clerk in the Purchasing Department. Upon graduating from Southeastern Oklahoma State University with a bachelor’s degree in Business Management in 1989, he accepted the position of Deputy Director at the Choctaw Nation Housing Authority. In 1997, he was appointed to the position of Executive Director of Health, where he oversaw the construction of the first tribally funded health facility in the U.S. and doubled the patient load from 120,000 to over 240,000. Batton developed partnerships with organizations and governments to add even more services to the health system. The Oklahoma University Health Sciences Center partnership resulted in Ear, Nose, and Throat (ENT) services being offered at Talihina and the inception of a specialized care program for high-risk youth with diabetes. A partnership with Eastern Oklahoma State College brought about the establishment of a dental hygienist program, and a coalition with the state of Oklahoma and other Oklahoma tribes led to the establishment of REACH, a program promoting physical activity and reducing the lifetime risks of cardiovascular disease.

In May 2007, Chief Pyle appointed Batton to the position of Assistant Chief. As Assistant Chief and among his numerous duties, Batton served as Chairman of the Choctaw Nation Business Committee. His first initiative was the development of an economic plan that consisted of a $385 million gaming facility expansion in Durant, Grant, McAlester, and Stringtown. This plan boosted the economy in the Choctaw Nation reservation and created more than 700 jobs for the area. Under Batton’s guidance, the profitability for all tribal businesses had an overall increase of 69 percent.

Batton is involved in the growth of the entire Choctaw Nation. He uses the Choctaw Nation brand of faith, family, and culture to guide him as he continuously looks for ways to develop programs and services that will benefit tribal citizens. Some highlights of his accomplishments since his term of office began include:

He and his wife, Angie, reside in Clayton, Oklahoma. They have two children, Stacy and David, and two grandchildren.