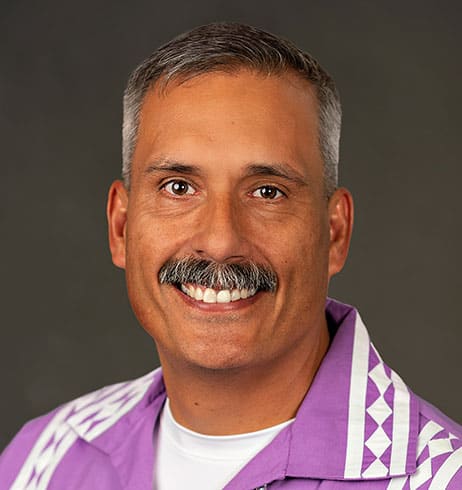 Austin began working for his tribe in 1991 with a position in the Choctaw Nation Health Care System, soon after being honorably discharged from the U.S. Army. He completed his Associates of Arts degree at Eastern Oklahoma State College in 1999. An opportunity arose with the Choctaw Nation’s Cultural Assessment of Resources and Evaluation of Services project (CARES), and Austin began working as a clinical/youth coordinator. In 2004, Austin obtained a Bachelor of Arts in Education from East Central University and his Master of Education in 2009. He is also a certified behavioral health case manager.

As Assistant Chief, Austin implements strategies designed to increase and sustain revenue streams, while directing capital expenditures and asset redeployment activities. He communicates and negotiates in an executive role on behalf of the Choctaw Nation for governing purposes with other tribal nations and state and federal political officials. Austin also serves as an official Choctaw Nation delegate to the Inter-Tribal Council of the Five Civilized Tribes. He participates in veteran’s advocacy programming for the Choctaw Nation of Oklahoma. Austin participates as a member of the Choctaw Nation Honor Guard and is a volunteer counselor for the Veterans Advocacy Military Support Initiative to mentor high school students interested in military careers. Austin also leads all legislative activities for the Executive Branch in coordination with Tribal Council.

In 2005, Austin was published for his vision and accomplishments regarding youth involvement in systems of care, and in 2014, he was recognized with the Outstanding Alumni Award from East Central University for his work in counseling.

He and his wife, Philisha, reside in Tuskahoma, Oklahoma. They have three children and four grandchildren.